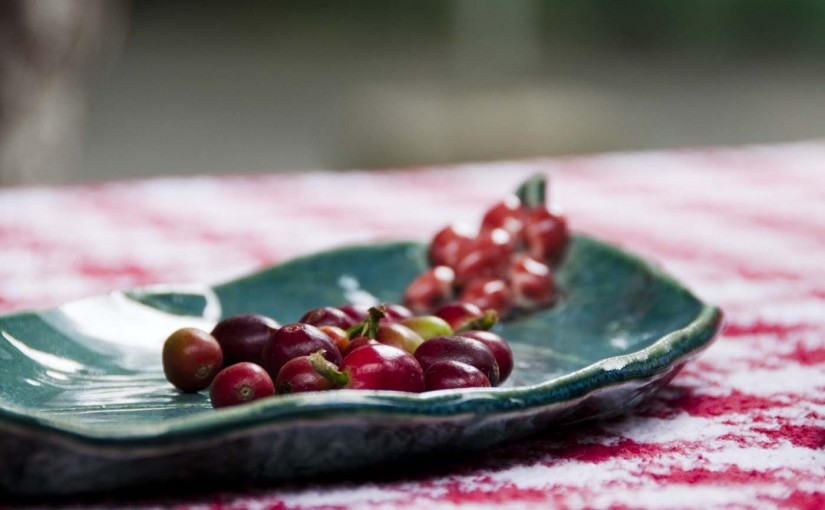 Kona coffee is known around the world for its unique flavor, produced from the rich volcanic soils of Mauna Kea and Mauna Loa—two of the Big Island”s volcanoes—on the slopes of which Kona coffee is grown. One of the primary reasons coffee thrives so much in the Kona Coffee Belt is the climate. With sun every morning and afternoon showers that are practically guaranteed, the area makes for ideal coffee-growing conditions.

On a warm, clear Thursday morning, I left the place I was staying and started the twenty-minute drive into Kona. As I neared the town, the weather quickly changed. (For those of you who have visited the Big Island, you know that the climate changes every twenty miles or so as you travel around the island. And for all you ski-bums: Yes, there’s even snow on the top of Mauna Loa.)

The weather now overcast, I passed Kona International Airport and made a left. Following the guidance of my trusty Garmin GPS unit, I began to climb, and quickly. In less than ten minutes, I ascended through the neighborhoods of Kona to Hao Street, for a total ascent of nearly 3,200 feet. Turning down Hao Street, the computerized voice of my GPS unit told me I had arrived at my destination. After a short trek down a private, “No Trespassing” road, I figured I wasn”t where I was supposed to be.

In ignorance of my once trusty GPS, I continued the drive down Hao Street for another quarter mile or so. And there it was—the Mountain Thunder coffee plantation, off on my right. I parked the car, grabbed my camera, and headed to where others were already gathering. Unsure of where I was supposed to be for the free tour and not having had my coffee yet, I made a beeline for the carafes of sample coffee that were situated under a pavilion surrounded by picnic tables.

I poured myself a two-ounce sample of the coffee and had just grabbed a packet or two of sugar when a man wearing a Mountain Thunder shirt came walking around the corner. “Hi there!” I exclaimed, thrilled to find someone who might be able to point me in the direction I needed to go. “Hi there,” he responded, unsure of what to make of my energy level. I asked him where I needed to be for the tour, and he told me I was in the right spot. He then spotted the sugar in my hand. “How do you know it needs additives if you haven”t even tried it yet?” he said, chastising my American habits. He was a coffee snob, and our tour guide. This was going to be good.

Following our trusty (coffee-snobbish) tour guide, we crossed Hao Street to the small array of coffee trees planted on the other side. To the unscrupulous eye, they blended in with the surrounding greenery; but a trained veteran would’ve spotted them for exactly what they were. As our tour guide introduced us to the coffee plant, it became clear that the trees he was using were planted and pruned just for these coffee tours. They had examples of poorly pruned trees, and well-pruned trees; and though most of the coffee cherries had been picked for the season, a few had been left untouched on the trees (for tourist eyes only).

Our tour guide then took us back to the picnic tables, where a few cherries had been neatly laid out for us in one dish, and next to it, another dish with some coffee beans, freshly pulped (i.e., removed from the skins of the cherries). This is the second step in the process of making coffee (the first being to actually plant, grow, and pick the beans). In this state, the beans are still surrounded by the parenchyma, a sticky, honey-like layer that’s designed to protect the beans.

Once pulped, the beans are taken to a wet mill, where they’re fermented (washed) for a period ranging from 12 to 24 hours, depending on elevation. This rids them of the parenchyma, leaving only a thin, paper-like coating on the beans. The beans are then left to dry for a period of seven to 14 days, until they reach optimal humidity (which, per Hawaii Department of Agriculture regulations, is between 9.5 and 12.5 percent). The beans are now referred to as parchment, which refers to the thin, paper-like coating that’s still left on the beans. The beans can be stored as parchment for quite a long time without going bad (i.e., growing mold, which can’t be done away with in the roasting or brewing process, and is harmful to human health; more on that later). They cannot, however, be wholesaled or roasted as parchment. (The Hawaii Department of Agriculture is very strict about this.)

The beans are then taken to the dry mill, in order to continue the coffee-making process. Here, the parchment layer is milled off (through a process called hulling), revealing the green bean underneath. The beans are then graded according to size and weight. At Mountain Thunder, they achieve a preliminary grading by blowing the beans through a series of screens, which sorts them by size into four different grades: Extra Fancy, Fancy, Select, and Prime. The step down from Prime is a small bean called a peaberry which, until 20 or so years ago, was thrown out as waste. Today, they’re sold as a delicacy, usually covered in chocolate.

Once graded by size, the beans are then graded by weight. At Mountain Thunder, they’re placed on a table called a gravity separator, the surface of which is on a tilt. When turned on, the table vibrates, sorting the beans by weight density, with the lightest of the beans being discarded as defects.

Finally, Mountain Thunder (and other high quality coffee mills) sort their beans according to an advanced color spectrometer. Using this machine, beans are examined by a computer with a fiber optic eye for any color defects (reds, blacks, whites—anything but green) and, in less than a millisecond, are either kept or discarded, leaving only the highest quality green beans for roasting.